What is the Merge? - Bitfinex blog
20252
post-template-default,single,single-post,postid-20252,single-format-standard,bridge-core-1.0.7,et_bloom,ajax_fade,page_not_loaded,,qode-title-hidden,qode_grid_1300,footer_responsive_adv,qode-content-sidebar-responsive,qode-child-theme-ver-1.0.0,qode-theme-ver-18.2.1,qode-theme-bridge,qode_header_in_grid,cookies-not-set,wpb-js-composer js-comp-ver-6.0.5,vc_responsive 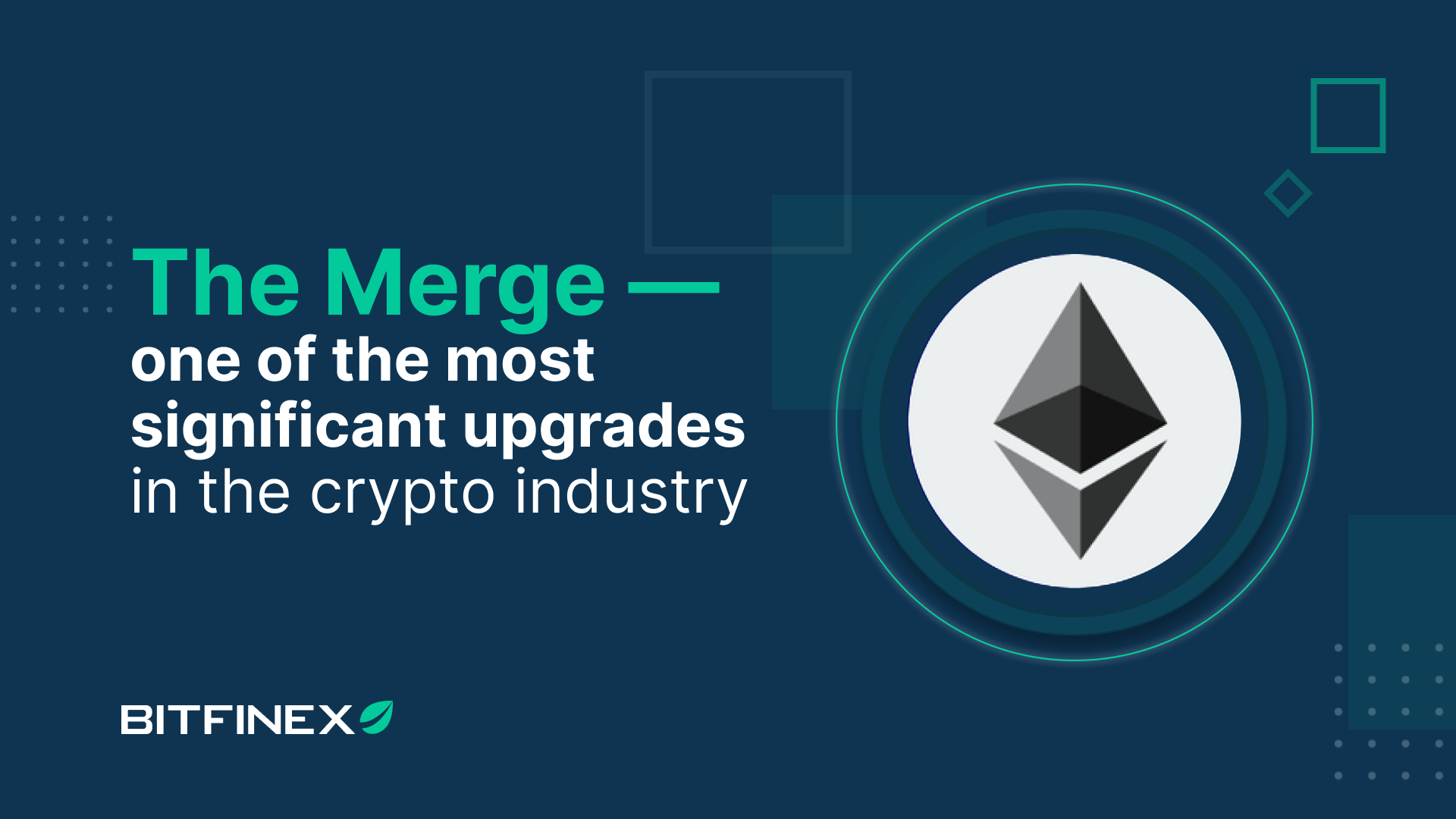 What is the Merge?

The Ethereum Merge has already made a name for itself as one of the most significant blockchain upgrades in the history of the cryptocurrency industry – and yet there are still many questions about what it means.

So what is the Ethereum Merge? What are its implications? And what are the main risks and misconceptions of this event? Let’s find out together.

Motivations behind the Merge

The primary purpose of the Merge is the Ethereum transition from its current Proof-of-Work (PoW) consensus mechanism to the Proof-of-Stake (PoS) model. In short, in the Proof-of-Work or PoW model, the network is secured by miners who buy and run mining hardware to secure the Ethereum blockchain. In this model, miners consume electricity and solve computational puzzles in exchange for the right to issue blocks and receive a portion of the transaction fees. In the Proof-of-Stake or PoS model, the network is secured by validators who stake ETH to validate the network. In this model,  the validators don’t consume much, if any, electricity.

The move to PoS was one of the significant milestones in the original Ethereum roadmap. Now, the main goal of the transition is not only to make Ethereum more energy-efficient and secure but also lay the groundwork for enabling more scalability with sharding later.

Instead of changing the algorithm to PoS in one massive and potentially dangerous upgrade, the Ethereum researchers and developers decided to divide it into two phases.

The first phase — launching the Beacon Chain — was completed in December 2020. This allowed for creating a different parallel Proof of Stake chain that could be tested in production for some time without directly affecting the already existing PoW network that secures hundreds of billions of USD of financial activity. Another meaningful reason for launching the Beacon Chain earlier was to give enough time to stakers, so the amount of staked ETH could be sufficiently large to secure the network at the Merge time.

The Merge itself is the second phase in the transition, which merges the Beacon Chain consensus layer with the Ethereum Virtual Machine (EVM) state of the Ethereum PoW chain. The transition to PoS aims at lowering the power consumption to secure Ethereum by around 99.95%.

Another motivation for completing the Merge is the reduction in the ETH issuance, as the security of the PoW and PoS chains is funded by ETH issuance. After the Merge, the PoW network will cease to exist, dramatically reducing ETH issuance. This was named “Triple Halving”, as the issuance drop is similar to three Bitcoin issuance halvings.

Apart from that, another argument for the Merge and the transition is that Ethereum enthusiasts will be able to secure Ethereum from home using a simple computer. Being a consensus participant will no longer mainly be for institutions and sophisticated miners. This should further decentralise the network and make it more resistant to attacks.

Mechanics of the Merge

As we have already mentioned, the Merge is needed to merge the Ethereum network user state with the Proof-of-Stake Beacon blockchain. So far, the Ethereum network is being validated by the node operators who run one of the available client implementations, such as Geth, Erigon or Nethermind. These implementations unite the execution layer (Ethereum Virtual Machine) and the consensus layer (Proof of Work). For the smooth transition of the Ethereum network to the PoS model, the execution and consensus layers are now split, so both of these layers can be run individually. Moreover, they can be developed by entirely different teams specialising in one of the layers.

When the Merge is completed, a full node will consist of an execution node and a consensus node. For establishing the communication between the two nodes, there is also an Engine application programming interface (API). The consensus and execution layers division allowed for a faster launch of the Beacon Chain without worrying about the execution layer.

For instance, one validator may prefer to run Lighthouse with Nethermind, while another may choose to run Prysm with Geth. With four popular consensus clients and five execution clients, we have 20 pairwise combinations. At the Merge time, execution clients like Geth will start listing blocks coming from the PoS chain. The trigger for this transition will be determined by a new variable which is called Terminal Total Difficulty (TTD). It represents the sum of the Proof-of-Work difficulties of every block collected on the Ethereum PoW network.

Surprisingly, this will be the first time an Ethereum upgrade is triggered using total difficulty instead of the standard block height. This is done to avert an attacker mining low-difficulty deliberate forks that would satisfy the block height requirement at the time of the Merge and lead to confusion on the final Proof-of-Work block.

Implications of the Merge

Another important implication is that it will be harder to attack the network because of the higher economic security and the power to slash attackers.

The Merge will also most likely decrease the ETH supply over time and spike more media interest as a “deflationary asset”.

In total, around 100 researchers and developers are working on the Merge. After the Merge, these resources will be freed up to work on other improvements such as, for instance, sharding.

Misconceptions about the Merge

The first misconception about the Merge is that it will improve Ethereum’s scalability and reduce transaction fees. That’s not true. The previously mentioned minor block time reduction can lead to a slight increase in throughput. What is more important is that the Merge and the transition to PoS lay the foundation for more scalability improvements that will be delivered in the subsequent network upgrades.

Secondly, the Merge doesn’t enable withdrawals of ETH from the validators immediately. This will be accomplished in one of the following hard forks after the Merge.

Another common misconception is that there will be another ETH token on the Beacon Chain or for Ethereum 2.0.

Also, as we know from the previous section, Ethereum doesn’t have to stop to enable the transition. This is one more popular misconception.

The last misconception is that ETH supply will keep decreasing and trend towards zero. This statement also doesn’t seem right. The ETH supply will find a balance based on network demand between the ETH issuance and the ETH burn rate from transaction fees. This balance can be established on different levels and change over time, but it will never reach zero.

Like any other complicated technology upgrade, the Merge doesn’t come without risks. Most of them are related to the transition to PoS rather than the Merge itself, but they are still worth discussing.

After the Merge, validators proposing the next block will be known ahead of time as part of a public selection process. This makes proposers vulnerable to networking Denial-of-Service (DoS) attacks. As an example, if the attacker knows they are one of the next proposers in line,  they can try to DoS the current proposers causing them to lose their slots and not include any high-value transactions that can now be picked up by the attacker.

The most popular solution to this problem, at the moment,  is a single secret leader election that uses clever cryptography to prevent the attacker from knowing who the next proposer is while still providing this information to the actual proposer.

There are also centralisation risks that come with the concentration of stake in pools like Lido. This can lead to attacks such as censorship or extortion. In the case of Lido, there is also governance takeover risk and smart contract risk. One of the interesting solutions suggested by the Lido community was to allow people who deposit their ETH to Lido and receive stETH to veto any potential dangerous proposals.

The Ethereum Merge is one of the biggest and most expected upgrades in the history of the blockchain. When it comes to the date of the Merge,  at the moment, most people predict it to happen around September 2022. This should be possible if no major issues are found during the Goerli testnet merge.

Despite a few potential risks, the researchers and developers have been spending countless hours making sure there are no surprises during the mainnet merge. After the Merge, we expect Ethereum to become more secure, sustainable, and perfectly positioned for the subsequent extensive upgrades.