One year ago today Bitfinex was hacked, in what will always represent the darkest day in our history.

8 months later we completed the final round of redemptions. We are grateful to our customers and shareholders who helped us accomplish this.

Today we are happy to announce Ethfinex – a community & information hub  to facilitate Ethereum-based discussion & trading.

Our vision for Ethfinex is rooted in the events of the past year, and we are excited to be able to share this moment with all of you.

Bitfinex is the world’s largest, most advanced digital asset & cryptocurrency exchange. Since its inception in 2012, Bitfinex has been the go-to exchange for BTCUSD trading, capturing over 20% of total trading volume whilst providing liquidity in a diverse set of markets.

Bitfinex developed its positive reputation due largely to its peer-to-peer financing facilities which went a long way to provide & maintain liquidity. Innovative & valuable, this feature facilitated a unique approach to financed trading and, amidst declining volatility, gave serious traders a reason to choose Bitfinex over others.

On August 2nd 2016, one year from today, Bitfinex became the latest victims of a crypto-exchange security breach. 119,756 Bitcoins were stolen from accounts, representing the largest Bitcoin theft after the Mt Gox incident. The breach contributed widespread uncertainty and frustration throughout the Bitcoin ecosystem and raised further doubts as to the safety of centralised exchanges.

The volume of stolen Bitcoins amounted to nearly 0.75% of total circulation – significantly more than in active use on the Bitfinex platform at the time. Due to Bitfinex’s relative popularity, a huge subset of the Bitcoin trading community was affected and BTC prices suffered an immediate 20% drop.

Shortly following the hack, Bitfinex announced the creation and distribution of the BFX token – a debt-backed token designed to represent users stolen equity – in a novel attempt to reimburse stolen funds.

Stolen funds were socialised across users and assets, resulting in an equal, widespread 36% loss of assets, and users were credited BFX tokens in an amount equal to the dollar value of their losses. These tokens presented users with the choice of conversion to equity in Bitfinex, the potential reimbursement of losses through the future operating profits, or the ability to immediately trade these tokens at market rate.

Given the history and track record of exchanges following security breaches of this magnitude, the BFX tokens were initially, and rightfully so, met with scepticism and uncertainty despite its widely recognised potential.

Slowly but surely, confidence was restored in Bitfinex and the Bitcoin ecosystem. BTC recovered, trading volumes returned and faith was being placed in the BFX token to redeem losses. 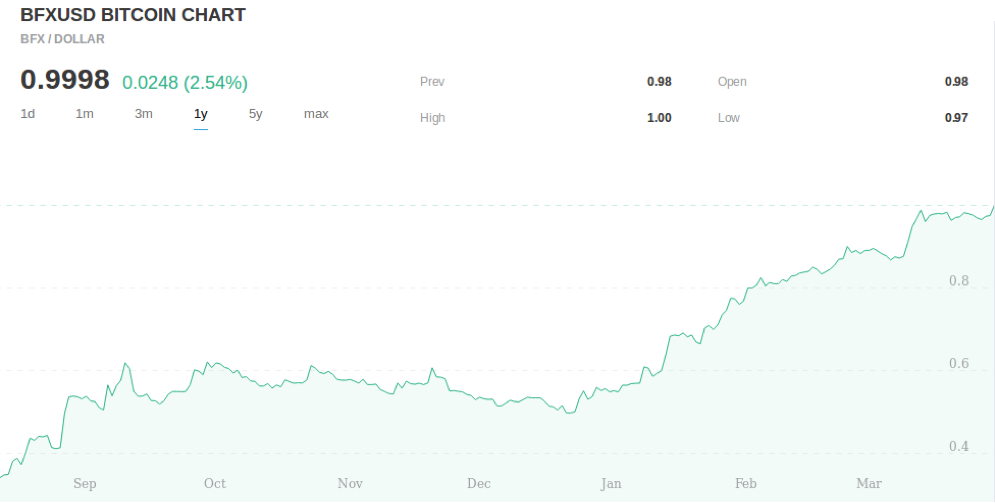 On April 3rd, 8 months after the security breach, Bitfinex announced the systematic redemption of 100% of all outstanding BFX tokens, essentially reimbursing lost funds.

Despite the efforts of Bitfinex to compensate losses, the community was shook, and the paradoxical nature of centralised exchanges questioned. The need for true decentralisation in the name of security & customer protection was hammered home, and the BFX token was an unintended, involuntary demonstration of how to go about achieving this.

The need for decentralisation

The BFX token proved a powerful lesson in the capacity of exchange decentralisation. With an indirect stake in the survival and future success of Bitfinex, users continued trading on Bitfinex despite doubt. This, in turn, led to a steady recovery of volume and liquidity, contributing additional value to the BFX token. The benefits this cycle brings to any platform dependent on network effects was clear.

Centralised exchanges have so far been a necessity; a gateway into an inaccessible, arcane ecosystem, and a stable, familiar bridge between fiat and digital assets. They are user-friendly, provide speed and convenience of liquidity in a manner that users have come to demand.

The true potential of blockchain technology is a product of decentralisation. The idea that exchanges should be exempt from this is nonsensical given its vulnerabilities to centralisation.

This is where Ethfinex comes in.

Spun out of Bitfinex, Ethfinex brings with it the vision of a customer-centric and highly liquid digital asset exchange platform. Ethfinex will be a hybrid community and information hub designed to facilitate discussion, development and trading in the Ethereum ecosystem.

Tokens and tokenised assets on Ethereum are fast proving themselves as the most exciting innovations of the decade. The core value of these tokens is often the communities around them, and the significant development they contribute. Following the growth of Ethereum however, these communities are often dispersed, with credible information difficult to find, analyse and track.

Ethfinex offers a new community and information hub for these tokens, designed to facilitate learning and analysis whilst offering access to a liquid trading platform for ERC20 tokens.

Ethfinex will reflect the nature of Ethereum itself: building smart contracts and decentralisation into everything it does.

The long-term vision is to move towards a trustless exchange, gradually decentralising ownership to our community of users.

Based on Bitfinex’s trading engine, we believe that fully decentralised models for exchange are not yet scalable. To accelerate the development of on-blockchain exchanges, the Ethfinex platform will pioneer a hybrid decentralised architecture. This will allow decentralised exchanges to plug into, and trade with, Ethfinex customers, as well as each other.

To find out more please join our community, and help lay the foundation for a decentralised future.

To contribute to our vision [email protected]