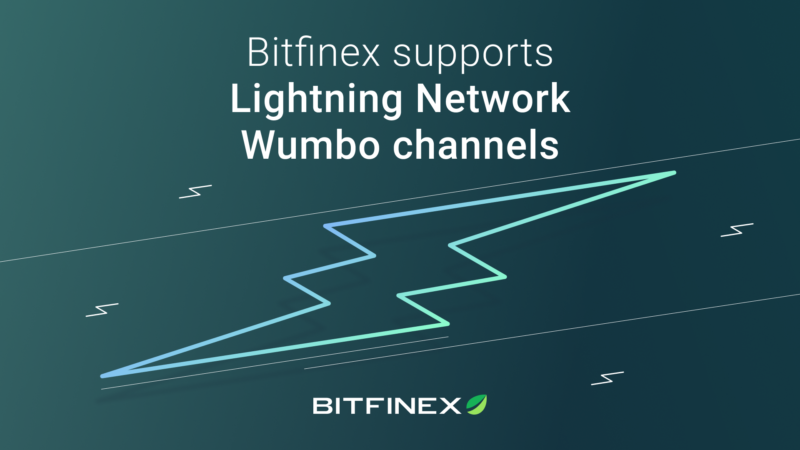 As one of crypto’s early adopters and key players in the industry, Bitfinex is excited about innovations that will help achieve the awaited crypto mass adoption. We are one of the few crypto exchanges that has integrated the Lightning Network on its platform, providing our users with instant Bitcoin deposit and withdrawal capabilities.

And we are continuously improving our Lightning Network integration to give more advanced features and capabilities to our users, at the same time, show our support towards the development of the technology.

If you are not familiar with the Lightning Network, you can have a look at our Lightning series to get a better understanding of the technology.

Our growing features and contribution to the Lightning Network include:

With two lightning nodes, Bitfinex has a combined public capacity of over 100 BTC. These nodes provide the network with two highly reliable payment routing services with low fees.

Bitfinex users can instantly move Bitcoin between the Lightning network and the main chain for free with just a click of a button.

Our Lightning Network wallet has processed thousands of transactions, saving our users’ time, while at the same time, reducing their transaction fees and blockchain footprint. Our nodes have helped route thousands of payments for the Lightning Network users worldwide, and we have progressively and organically grown to become one of the highest capacity nodes in the network.

When the Lightning Network was launched, the protocol developers put a hard cap on the maximum capacity of the Lightning Network payment channels. This hard cap is an arbitrarily low amount set at the protocol level to protect users from unforeseen bugs or errors that could occur as the network was still young, and its implementations were still in massive development.

This careful and considerate approach was taken by the Lightning Network developers to ensure the security of the users’ funds as they are continuously working on building the protocol as well as its implementations.

As the network slowly becomes more mature, the major implementations of the Lightning Network protocol have proceeded to remove the hard cap on channel capacity, paving the way for unlimited channel sizes and payment amounts.

Bitfinex sees a huge potential in these larger channels, so we are bringing the Wumbo channels support to Bitfinex Lightning Nodes!

The Wumbo channels will give our users the ability to deposit and withdraw large amounts of Bitcoin quickly and cheaply, thus allowing them to take advantage of trading opportunities. They will also enable retailers and service providers to build new, innovative applications and sell high-value goods and services over the Lightning Network as they help to reduce the requirements to open and close multiple channels.

Bitfinex believes this is a big step towards the goal of scaling Bitcoin through the adoption of the Lightning Network.

To celebrate this release, we have opened 3×5 Bitcoin channels, which are the biggest channels in the network so far.